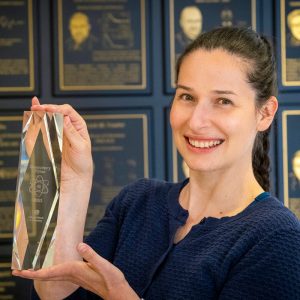 This past spring, Eszter Boros, an assistant professor in the Department of Chemistry, became the fourth winner of the Stony Brook Discovery Prize. Created in 2013 by a donation from the Stony Brook Foundation’s Board of Trustees to advance pioneering scientific breakthroughs, the competition, held every other year, is a pathway to capitalize on new innovations while helping to advance the career of a rising star on the Stony Brook faculty.

Because the competition was held virtually due to COVID-19, the four faculty finalists — Boros; Eric Brouzes, Biomedical Engineering; Gregory Henkes, Geosciences; and Kevin Reed, Marine and Atmospheric Sciences — presented their research to the judges and guests on Zoom.

“The Discovery Prize is one of our most important traditions, and especially so in 2021, because although much has changed over the last year of the pandemic, the passionate, committed pursuit of knowledge, research and discovery at Stony Brook University has not,” said President Maurie McInnis.

Boros, who joined SBU in 2017, presented her work on “Activation of anticancer drug molecules with a radioactive light switch.” In the process of developing radioactive imaging agents, Boros’ lab found that radioactive imaging agents produce a small blue light flash that could be used as a way of turning on light-activated chemotherapeutics, specifically at the tumor site. Targeting the toxicity of chemotherapeutics in the tumor and nowhere else in the body should lead to better patient outcomes, fewer side effects and, hopefully, less resistance to chemotherapies.

She will be using the $200,000 prize money to fund work from graduate students and postdoctoral fellows, who will tackle the complexities of the work she proposed, as well as to purchase supplies, including radioactive isotopes. She said she hopes the prize money will help keep her lab moving forward for the next two to three years.

“I’m very much humbled and incredibly grateful,” Boros said after she was announced as the winner. “This is amazing. This enables really exciting science for my research group and my students, who are super excited. I’m very grateful to the Stony Brook Foundation. It’s been a great process that I got to share with three phenomenal fellow colleagues.”

Boros, a native of Switzerland, was trained in inorganic chemistry and radiochemistry at the University of Zurich, where she received her BSc/MSc, and at the University of British Columbia, where she earned her PhD, designing radioactive metal complexes for prospective biomedical applications. Marrying her passion for the fundamental chemistry of metal ions and developing means to diagnose and treat disease, Boros has established a multidisciplinary research program that combines synthetic chemistry and radiotracer design to develop the next generation of metal-based imaging probes and therapeutics.