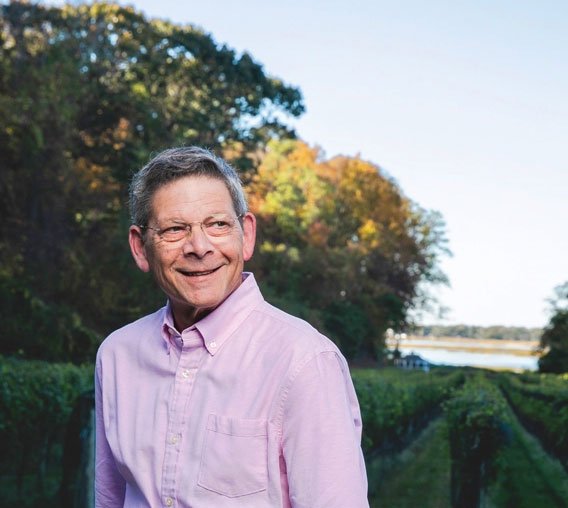 Thinking Beyond Limits Leads to Decades of Discovery

It was 1982 when David Acker ’81 confronted a tangle of wires and circuits in the back of a gigantic Stony Brook University computer.

A graduate student in psychology, Acker was studying the electrical properties of birds’ brain cells to understand how different areas of the brain learn. To accelerate his progress, he knew he needed to upgrade his computer hardware.

He could wait for a computer consultant to come to campus, but that might take months. Besides, Acker was curious whether he could solve the problem on his own. “How hard can it be?” he told himself as he wired in a handmade computer board. And it worked.

Little did he realize that this single act of daring would shape the future of Acker’s remarkable life as a technology disrupter, medical innovator and business pioneer.

Growing up in Philadelphia and later Rockland County, New York, Acker was relentlessly curious and a quick learner. He finished high school a year early, eager to pursue his studies in science.

“My parents dropped me off at the Stony Brook campus on my 16th birthday,” Acker recalled, “and to this day, the University holds a special place in my heart.”

Acker’s success in upgrading his computer led him to realize that other researchers around the country might need the same solution. He soon found himself making increasingly complex data-acquisition and process-control computer cards and selling them to research labs. While still holding down a full course load, he formed a company (the first of several over the trajectory of his career) to meet the demand for the cards.

Acker continued to tinker and find solutions. When a neurosurgeon asked him whether it was possible to make a device to navigate minimally invasive instruments inside the brain, Acker built a prototype with pieces from an auto parts store.

“I bought three magnetic field sensors and glued them together,” he said.

This inventive gadget inspired Acker to create a cardiac mapping and ablation system that produced, for the first time, 3D electro-anatomical maps of the heart to locate sites causing arrhythmias. This product was commercialized as CARTO by Acker’s company Biosense, which was acquired by Johnson & Johnson in 1997. Today CARTO is the worldwide gold standard for finding and ablating arrhythmogenic sites.

These days Acker is working on a new challenge: curing keratoconus — a progressive eye disease in which the normally round cornea weakens and becomes cone shaped. With symptoms first appearing in one’s early teens, it can render a person blind for life, with the worst cases treatable only by a corneal transplant.

Again, with collaborators at his company TECLens, Acker developed a technology and procedure that uses ultraviolet light and vitamin B2 to strengthen the cornea. Physicians saturate the patient’s eye with vitamin B2 drops and insert a special high-tech lens, CXLens, connected to a fiber-optic cable. Through the cable, the UV light shines into the person’s eye, photoactivating the vitamin B2 and making the cornea’s collagen “cross-link,” rebuilding it within 30 minutes. Already proven to work in a small pilot study, TECLens technology will soon start larger trials for FDA approval.

In Search of Our Evolutionary Secrets

In addition to developing new technologies, Acker’s innate curiosity drove him to invest in research in one of humankind’s most enduring and significant questions: Where did we come from?

In the early 2000s, he helped launch Stony Brook University’s Turkana Basin Institute — an archaeological hub tracing the origins of humanity, founded by renowned anthropologist Richard Leakey and paleoprimatologist Lawrence Martin, a Stony Brook professor and director of the Institute.

“The region is full of fossils and stone tools that allow us to uncover the evidence for the history of humankind, and that’s what excited David, who is incredibly scientifically curious,” Martin said.

“Lake Turkana’s shores are millions of years old, and as the wind blows the sand, the fossils come to the surface, so we can walk along the shore and find fossils of all kinds of things,” Acker said with a childlike excitement at the promise of evolutionary secrets to be discovered.

That’s important for our future, he added. “I believe we need to understand how we evolved, to accurately imagine how we will continue to evolve.”

With 33 patents to his name, a center researching human origins that he helped launch, millions of patients relying on his inventions, and his nearly 20 years of service as a Stony Brook Foundation Trustee, Acker has created a long-lasting legacy at the University and around the globe.

“Stony Brook has an amazing faculty, all of whom teach you to think beyond the existing limits,” he said. “Never be constrained by prior knowledge. That’s how I live my life.”

Lina Zeldovich’s articles have appeared in publications like Reader’s Digest, Newsweek, Popular Mechanics and The Atlantic.