Professor, poet and political activist Patrice Nganang is guided by passion and justice 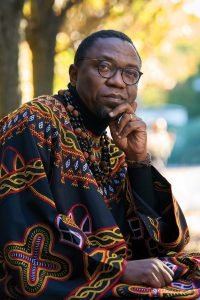 Patrice Nganang’s experiences as an activist in support of his native country help him inspire and connect with his students. Here, he wears a toghu, the traditional cloth of his people, the Bamileke, in Cameroon, Central Africa.

Patrice Nganang brings passion into nearly everything he does — from inspiring his students and colleagues, to writing a fictional visualization of his native Cameroon, to his advocacy for prison reform.

“You have to love what you do — it’s a matter of passion,” he said. “Passion is the mover of life, the changer of communities, the dynamo of every single thing.”

Nganang, a professor and current chair of the Department of Africana Studies in the College of Arts and Sciences, joined Stony Brook University in 2007 as a faculty member in the former Department of Cultural Analysis and Theory. As a scholar, he investigates the diverse ramifications of violence and has a particular interest in the “colonial archive” (pictures, books, instruments), having published and lectured extensively on this topic.

Yet he tends not to teach his own books; rather, he describes to students what he has researched and learned firsthand — often, a verbal illustration of his life experiences that drive his commitment to the causes he supports so passionately.

In 2017, Nganang returned to his home country to do research for one of his recent novels on the Anglophone crisis — a conflict in which the Cameroonian government sent its soldiers to attack English-speaking professors. He was subsequently incarcerated for three weeks in a maximum security prison for allegedly inciting violence and insulting the Cameroonian president in a Facebook post and has since been officially exiled from the country.

That experience changed the direction of his work.

“Before being incarcerated myself, I did not look into the mass incarceration of Black people in the United States,” Nganang said. “I was campaigning for people incarcerated elsewhere and did indeed manage to free some through these campaigns.”

Since then, as chair of Africana Studies, he is working to do something about it through continued campaigns and by educating the community — starting with his hope for SBU to have a program in prison education — one that would expand opportunities for incarcerated individuals and help assure they are channeled into a positive direction. Nganang said he uses his own incarceration as a teachable moment, telling students about his experience and enlightening them about the mass incarceration of Black people in the United States, which he calls “the slavery of our times.”

A Duty to Teach
While he has always been an affiliate faculty member of Africana Studies, Nganang’s original background is in German Studies. His teaching career began in Germany at the age of 23. Many of his students were older than he was at the time, which uncovered an interesting dynamic and reciprocal relationship. In fact, when Nganang first moved to the United States, he did not speak English — he attributes his learning of the language to his students.

“Students are absolutely my best teachers. I suspect that through the years, I’ve learned more from them than they have learned from me,” he joked.

And he makes a point of giving back.

“Many things have changed since I first started teaching — even the structure of what it means to be a professor has changed,” he said. “What has not changed is my hope to inspire my students to do the things they love — and to understand that they are the future.”

Nganang made connections with his students early on, from the time when he gave his first talk prior to joining SBU. His talk was deeply rooted in philosophy and cultural theory, tied to his early scholarly work. “It’s how you break down the most complex information for students to understand,” he said.

Mona-Lisa Barthelemy ’23, a multi-disciplinary studies major with concentrations in political science; women’s, gender and sexuality studies; and Africana Studies, is one of those students who has benefited from Nganang’s inspiration. A nontraditional student, she first met Nganang upon her search for an Africana Studies class that was right for her — something engaging, interesting and well-evaluated by peers. Upon taking Nganang’s History of Africana Studies course, Barthelemy had an epiphany, realizing there was so much more she wanted to learn. 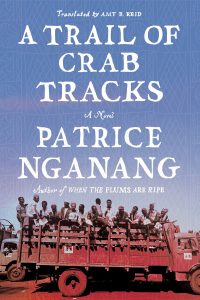 The cover of Nganang’s latest book. Writers from three continents including the U.S. and Africa, recently gathered at Princeton University for a symposium to celebrate and discuss his work.

“He’s a game changer,” Barthelemy said of Nganang. “He helps you to think outside of a Western paradigm and makes you realize the framing that you’re projecting onto things. I always enjoy that challenge and the aha moments that come from that. He’s inspired me in so many ways, including certain places I want to see. For one, I can’t wait to visit the continent of Africa with my renewed perspective based on what I’ve learned in his classes.”

Continuing to share his perspective — and his truth — with his students and the world at large remains a priority.

In May 2022, Nganang was one of 80 writers from around the world who convened at the United Nations for the Emerging World Voices Congress of Writers to address timely crises including the Russian invasion of Ukraine and the global decline of democracy, among others. And earlier this fall, he participated in an on-campus panel discussion on the consequences of banned books in the United States.

“Of course, writers have to tell the truth,” Nganang said. “But the truth is not something people want to hear. That is why writers prefer to write it down.”

And now Nganang, having finished his novels on Cameroon, will write down his own story in his upcoming memoir. “I’ve always been more compelled to write about other situations, other people,” he said, “but I notice that there are very few memoirs about Black men who tell about their childhood, or rather, their happy childhood. Growing up in Cameroon, my childhood was actually happy.”

It’s those childhood memories that in many ways fueled his determination to tell the story of Cameroon. Earlier this year, Nganang released the third in his trilogy about the history of Cameroon, for which he was profiled in The New Yorker. He noted that in his writing, his “goal is to transform the city of my birth, Yaoundé, into a library, to reconstruct the voices, smells, tastes and languages of people, animals and plants, in order to create a sense of that city in letters. For after all, one cannot return to the place of one’s birth.”

For him that is literal. “Being banned, or to put it mildly, being in exile has always been theoretical to me,” Nganang said. “I wrote my PhD on writers Brecht and Soyinka who spent years in exile, admired writers like Thomas Mann and Dante who spent years in exile because they were banned from their country of birth, but I never truly thought about what it means. It means not seeing my dad anymore.”

As chair of Africana Studies, Patrice Nganang reflects on how far the Department has come since its establishment in 1968 – then, one of the first formal academic units for Black studies in the U.S. – and his plans for its continued evolution.

One of his goals, he said, is to put the Department back on the map as one of the greatest Africana Studies departments in the U.S. In doing that, he and the Department are committed to interdisciplinary collaboration with other academic units across the University, as well as supporting colleagues in their research and publishing, teaching and political and community activism.

African Studies is also working on a no-plastic policy for the SBU campus. Given its location on Long Island, the University has a close relationship to water – and the ocean. “Plastic is killing our oceans,” Nganang said, “and we are committed to doing something about it.”

In Fall 2021, under Nganang’s encouragement, the Department of Africana Studies participated in a student-initiated Climate Strike on campus, organized in collaboration with Sunrise SBU, Environmental Club and Marine Science Club. The group presented a list of demands to the administration, including availability of large-scale waste statistics; a push towards sustainable infrastructure and innovation; increased transparency of Stony Brook’s environmental practices; and more climate and sustainability education.

“When I first came to Stony Brook, people were smoking everywhere – and today, the campus has a tobacco-free policy,” Ngangang said. “I know it can be zero plastic as well, and I’m happy that Africana Studies is driven to see that vision materialize.”

Rachel Rodriguez is the Associate Director, Communications in the College of Arts and Sciences Office of the Dean