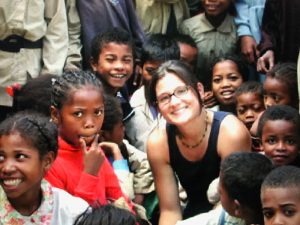 On school days, Rebecca Grella BS ’99, MA ’00, PhD ’12 (biological sciences, biology, and ecology and evolution), a science teacher and research scientist, is just as likely to be taking her students through the salt marshes at Sunken Meadow State Park as she is to be in the state-of-the-art research lab she developed at Brentwood High School. Since 2018, her students have been working with New York State Parks and Save the Sound to replant and restore the salt marsh, planting more than 2,000 Spartina alterniflora. The goal is for students in this underrepresented community in the largest suburban school district in the state to experience science up close through access not available before Grella started the program.

“I’ve dedicated 20 years of my career to getting more people of color involved in the sciences, to be the voice of change and the ones moving the legislation and who people are listening to,” Grella said. “They come in as 10th graders who’ve never picked up any equipment, and by their senior year, they’re out conducting real-world investigations.”

Her vocation started at Stony Brook in the Department of Ecology and Evolution. She credits the founding chair of the department, Lawrence Slobodkin, for his belief in her work in preparing her with a foundation to make a difference in her field. “He changed my life and believed in the work I do with high school students,” she said.

Grella has also worked closely with Dianna Padilla, a professor in the department, to institute the marsh research projects they started at Flax Pond in Old Field, New York, which led to the work being done at Sunken Meadow.

“My collaboration with Dr. Padilla has led to the lab we work in at the high school,” Grella said. “We have dubbed it ‘Little Stony Brook.’ It’s a state-of-the-art research lab with growth chambers, mussel tanks, microscopes and myriad other cool sciencey things.” 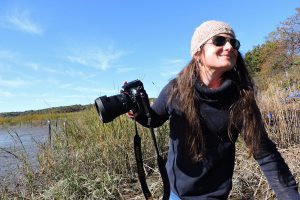 Rebecca Grella in the marshes at Sunken Meadow.

Grella’s vocation began while she was getting her master’s at SBU and working in Madagascar for six months. “It was the beginning of the rest of my life, because there I saw an imminent need to help those who didn’t have the resources that we had in the U.S., both for teaching and the environment,” she recalled. “I worked with kids in Madagascar to replant and reforest the rainforest. When I came back from that trip, I realized it’s not just Madagascar that needs help. It’s right here in our own backyard. I did my student teaching in Brentwood and fell in love with the population, 57 different cultural nations represented in the student body. I took a job in Brentwood and started a research program as an afterschool initiative. That became a class and my life mission.”

From 2004 to 2006 Grella started pushing forward with the research program, taking her students to science competitions where they were up against students from schools like Roslyn, Syosset and Jericho. “I was going to the Salvation Army to buy jackets for my kids so they looked like the rest,” she said. “I called it the ‘Science Unfair’ because my students didn’t have the same skill set and background as everybody else.”

But all that changed in 2010, when after a second bout with breast cancer while finishing her PhD, Grella said she sunk herself into research — and the Brentwood program. The students started to win competitions and in 2011 had a first-ever recognition for the district from the Siemens Competition. Finalist Samantha Garvey was doing research in the Department of Ecology and Evolution at Stony Brook. In 2012 she was recognized as an Intel semifinalist.

Since 2010, Brentwood has had more than 20 national winners and brought in over $20 million in college scholarships, according to Grella. This year, two of her students, identical twins Roberto and Ricardo Lopez, made the ranks in the Regeneron Science Talent Search competition. Roberto is a finalist and Ricardo was a semifinalist. (See box.)

The teacher calls her lab “the little gem of the district” because her students have gone on to Yale, Harvard and MIT. She believes that all students, regardless of ZIP code, should have the resources they need. 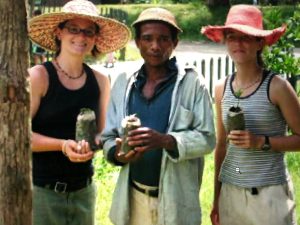 Rebecca Grella and friends from her time in Madagascar.

Grella also works with the Suffolk County government on environmental issues and is the co-principal investigator on a Suffolk County legislative grant, “Scientists and Stewards Assessing Nitrogen Migration.” She’s working on several projects with Stony Brook and is the lead PI on a digital literacy grant from the New York State Education Department for $1.2 million over the next five years. For this she’s partnering with the Stony Brook School of Professional Development and the Department of Ecology and Evolution. She recently founded a nonprofit organization, the Foundation for Equity Resources for Community Based Needs (FERN), which focuses on bridging equity gaps in underserved communities. Its goal is to foster community-based partnerships with businesses to see that community needs are met. Additionally, she has been sitting on the School of Professional Development’s Diversity, Equity and Inclusion board.

“It has all been an energizing experience,” Grella said. “All of this ties back to the work that I do in the salt marsh. Getting students out in the field asking questions of emerging relevance is critical to creating the next generation of scientists. Through STEM anything is possible, and asking questions about the ecological world is critical to ensuring a sound environmental future.”

Her primary goal in helping to save our environment is to encourage students to ask questions about the natural world and connect with it, thereby getting “hooked on nature and then going on their own mission to preserve and protect,” she said. “My focus is to be the mentor that helps develop those important questions of emerging relevance, the questions that need to be addressed with scientific discovery. We need to get students out collecting data that drives decision-making at all levels.”

Another part of his two-year project examined what happens when phragmites — an invasive plant species — die and shed their leaves, while contributing to the death of native vegetation. Ricardo also did research at Sunken Meadow, looking at salt marsh loss through Spartina alterniflora leaf samples, sediment samples and accretion data from the salt marshes to investigate the overall marsh health in restored salt marshes as compared to a native salt marsh at Sunken Meadow. His overall study findings suggest that native marshes are healthier than restored marshes.
Here are a few of the ways they helped out:

Rebecca Grella with two of her star students, twins Ricardo (left) and Roberto Lopez.
Rebecca Grella and students in their Brentwood High School lab (pre-Covid).
Students Roberto and Ricardo Lopez working on an experiment at Sunken Meadow.
Roberto and Ricardo Lopez both made it to the semi-finals of the Regeneron Science Talent Search, with Roberto making it to the finals.

Liza N. Burby is a freelance writer and features editor for Stony Brook University Magazine, as well as a journalism professor.