Focusing on a Cure

What if the cure for cancer was always present within the human body?

For tumor immunologist Oladapo O. Yeku, PhD, MD, FACP ’10, ’12, this idea is not so far-fetched. In fact, as an assistant professor of medicine at Harvard Medical School and attending physician in the Division of Hematology-Oncology at Massachusetts General in Boston, it is central to his research on ovarian cancer. The idea is that by harvesting and engineering a person’s T-cells, they can then be re-infused into the body to fight their specific cancer. 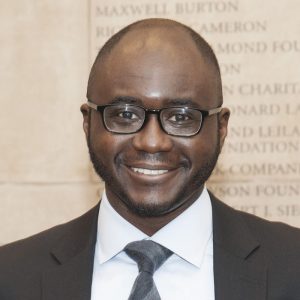 “Where this work is going, in its ultimate form, there will be a system whereby we can take a person’s own immune cells, modify them in just the right way for the right person, such that with one or two infusions, we can permanently eradicate their cancer,” said Yeku.

While the 2021 40 Under Forty honoree’s research is impressive, his work extends far beyond the lab. If you were to ask Yeku what he’s most proud of in his career, it’s been his ability to work at the clinic and the lab concurrently.

By seeing patients and conducting research at the same time, he is not only able to reconcile his first-hand experiences with his lab research, but he is also able to provide patients with a unique sense of comfort.

“It is very powerful and meaningful to patients when they are able to talk with the person influencing the design of the drug they are currently receiving,” he said.

While his oncology research began at Memorial Sloan Kettering Cancer Center, where he completed his fellowship in oncology and postdoctoral work in tumor immunology, Yeku acknowledges that Stony Brook served as the foundation for much of his work today.

Through the Alliance for Graduate Education and the Professoriate and the Turner Fellowship programs, Yeku performed research at Stony Brook during the summer while he earned his undergraduate degree at another institution, exposing him to the lab setting for the first time. It was then that he met the man who would become his mentor, Distinguished Professor and Chair of Pharmacological Sciences Michael Frohman, MD, PhD.

“It was Dr. Frohman’s passion and mentoring as a researcher and scientist that drove me to enroll in the MD/PhD (MSTP) program,” said Yeku. “To this day, I still try to model my lab after his.”

With Frohman’s guidance, Yeku went on to earn his PhD in Molecular and Cellular Pharmacology, followed by his MD at Stony Brook University.

Yeku, who is now well-established in his own career, has an important message to share with the next generation.

“Gaps in women’s cancer research are wider than you might think, especially in ovarian, endometrial, and cervical cancers. Students should really consider working in this area. Many hard problems remain to be solved.”

When it comes to her career, medical anthropologist Marta Levitt ’76 said her proudest moments reach across the globe.

While earning a BA in anthropology from Stony Brook University, Levitt became intrigued by medical anthropology – the study of cultural differences in how people perceive, respond to, treat and prevent illness and disease.

Her 40-year career throughout Asia and Africa has focused on maternal and newborn health, HIV/AIDS, family planning and reproductive health, child health, nutrition and malaria.

But no matter how far Levitt has gone, her connection to Stony Brook remains important to her.

“It was the way the anthropology department combined theory and practice and encouraged my wide range of interests that really prepared me for my career,” said Levitt.

“I was inspired by my on-campus job in the late Professor Marvin Kushner’s pathology lab, where I did tissue culture and prepared specimens for the electron microscope on a study of cancer tumors,” she said. “I was also inspired by Dr. Phil Weigand, then chair of the Anthropology Department, who involved me in preparing archaeological specimens for nuclear analysis at Brookhaven National Laboratory.”

These experiences pushed her to pursue a PhD in anthropology from the University of Hawaii, where she would continue applying a multidisciplinary approach to her research and work. This became the catalyst for an extraordinary career.

Levitt’s PhD dissertation on birth and traditional birth attendants in Nepal would serve as the foundation for Nepal’s National Traditional Birth Attendant Training Program, earning her an invitation to become the program’s advisor, where she spent 10 years working in the Ministry of Health. From there, Levitt went on to work in over 11 countries.

“Each country, with its many cultural groups and languages, provided me with a rich understanding of the complexities of trying to introduce new health technologies and interventions into existing traditional societies and local environments,” said Levitt.

Today, Levitt is the chief of party for the United States Agency for International Development Integrated Health Program in Nigeria, where she is responsible for the management of a $225 million project to improve access to quality primary healthcare services and scale up high impact interventions in both public and private sectors.