Movie magic. Do you remember how it feels? The palpable excitement as the trailers run, the smell of freshly buttered popcorn, the polite din of a full house dampened by the theater’s acoustics, the feeling of anticipation just before an alternate reality begins. Finally, silence washes over the crowd as the lights dim, and all at once, you’re in a different world.

The experience of being in the theater will never be replaced, but even thriving arts centers such as the Staller Center for the Arts – which held its last live performance on March 7, 2020, to a sold-out house – would be forced to change to survive due to COVID-19 restrictions. 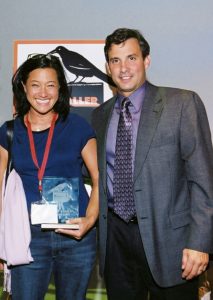 Performing arts centers, museums and galleries have been hearing “change or die” for many years, and with streaming services making it easier than ever to stay on your couch, the arts have long been fighting for survival. Back in a 2007 Newsday article, Alan Inkles, director of the Staller Center, said, “To compete with ready-made forms of entertainment, arts organizations must be at the top of their game,” a resounding statement made louder in the times of COVID-19. “I knew, right away,” said Inkles, “we had to change, and change we did.”

For nearly 25 years each July, the Stony Brook Film Festival has brought more than 10,000 people to the Stony Brook campus to view the best independent films that Inkles and his festival committee could find. Festival planning begins more than a year in advance and when the university cancelled all campus events last spring, plans for the 2020 festival were already nearing completion. But even the best-laid plans looked a little different last year.

“I knew we needed to embrace the streaming services and look at this as an opportunity,” said Inkles. He immediately reached out to his friend, Scilla Andreen, the CEO of IndieFlix and once a budding film producer who in 2003 won the Jury Award for Best Film at the festival. Indieflix, now in its 18th year, was hoping to develop a streaming app for film festivals, and Stony Brook became the pilot program for IndieFlix Festivals.

Both teams had to figure out the best way to make a virtual festival happen. “I knew I still wanted it to feel like a festival, with premieres that would only be available for a short amount of time,” said Inkles, “but first, I wanted to test the waters with our audience.”

Patrons, donors and friends were missing the arts but how would they respond to a digital format?  Inkles would soon find out. In May 2020, the Staller Center announced its online Short Film Series featuring award-winning short films from their past festivals to see if there would be an interest in an online festival. Kent Marks, festival co-programmer, introduced the short films and interviewed filmmakers, which helped with creating an accessible Q&A format for the virtual festival.

“It was a perfect compromise,” said Katie Stockhammer, financial director for Staller. “We were able to provide some great, bite-sized content for our patrons and get a pulse on how they felt about watching the films at home.”

Following each short film, patrons were invited to fill out a survey about their experience and the feedback was universally positive. “We received some really uplifting responses to the series, which was especially helpful during such an uncertain time,” said Stockhammer. “Patrons said it gave them something to look forward to and how happy they were to have the experience of a festival at home.”

With this preliminary success, Staller and IndieFlix Festivals moved forward with the 2020 Stony Brook Virtual Film Festival. By the end of May, the festival committee knew which films would be included and scheduled filmmaker Q&A sessions. In July, the Staller Center officially announced that its 25th anniversary festival would be available online through IndieFlix Festivals. The 2020 festival would run September through December – in place of Staller’s now cancelled live performance season – offering a new short film and feature film each weekend.

Nearly 2,000 patrons participated in the festival with an additional 600 complimentary student passes redeemed.

“I am so proud of the virtual festival and the partnership with IndieFlix,” said Inkles. “It was such a great success that we decided to offer our Spring Film Series on the app as well.”

He added, “We miss the magic of the theater, too, and we hope to do a hybrid festival event this year. No matter what, we are determined to keep sharing our love of film and the arts with the community.”

With New York State recently easing COVID restrictions on performance venues, Inkles’ outlook is hopeful for festival plans for this summer. An announcement for the 2021 Stony Brook Film Festival is expected in May.