For Zarya Shaikh ’22, a University Scholar and a senior biochemistry/women’s, gender and sexuality studies dual major, the most unexpected events can lead to something very positive. 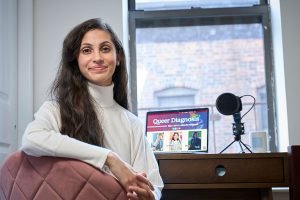 Zarya Shaikh created the Queer Diagnosis podcast, which she produces from her home.

An aspiring surgeon, Shaikh knew she wanted to be a doctor from a young age. A long history of cardiac disease in her family led to her early exposure to illnesses — and an interest in science. She received her first microscope from her father when she was in second grade and began doing experiments. “A recurring conversation about who was leaving hair in the shower led me to look at my family members’ hair follicles under the microscope. It turned out to be me!” Shaikh recalled.

By coming to Stony Brook, Shaikh has had the opportunity to not only study her intended field of biochemistry, but also to try various courses that weren’t necessarily related to her major, such as introductory queer studies, race, and ecology and evolution. “I didn’t want to be siloed into one domain, and I’ve always wanted to expand my field of research by exploring my many interests,” she said.

At the start of her junior year, Shaikh saw an announcement for an open house for the Department of Women’s, Gender and Sexuality Studies (WGSS). “I’d always wanted to learn more about reproductive health, gender, and sexuality,” she said. “I didn’t know that Stony Brook had an entire department dedicated to this field, so I went to the open house. I was inspired by the energy I felt among the faculty there, and it motivated me to bring that same energy to my pursuit of medicine. The ‘you can do this’ support from faculty, in addition to really interesting topics like reproductive justice — having access to this whole body of information that I may not have found at another university — have been extremely important to me. It goes back to the idea that opportunities at Stony Brook are unlimited.”

As she began her journey into the healthcare field, Shaikh was surprised by the lack of LGBTQ+ representation. One night in December 2020, she was searching online for “Pakistani Muslim LGBTQ+ physicians” — a search that returned zero results. After finding an article in which a physician interviewed LGBTQ+ colleagues who spoke about the isolation they felt in their industry, Shaikh intended to email the physician with some questions. She then had another idea: create a podcast. 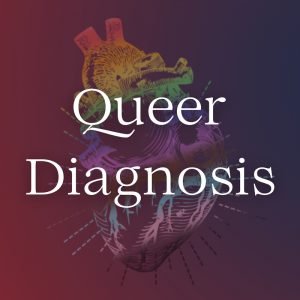 The Queer Diagnosis podcast has more than 20 episodes now available.

“I realized that the conversation I hoped to have with this physician was one from which others could also benefit,” she said. That same night, Shaikh called two friends, alumnus Srihita Mediboina ’21 (applied mathematics and statistics/economics double major) and Jameson Coleman ’22 (physics and astronomy double major) and told them of her podcast idea. By the end of the night, they were all in. Microphones were ordered and the concept was decided: What followed was “Queer Diagnosis: The LGBTQ+ Health Podcast.”

“Through ‘Queer Diagnosis,’ we’re dedicated to making sure that LGBTQ+ folx from all walks of life are represented, doing our best to meet with patients, medical students and healthcare providers,” Shaikh noted. “Representation is so important, and we’re interested in discussing the well-being of all communities.”


A year later, the podcast has grown beyond anything Shaikh expected, with more than 450 listeners. She attributes much of this growth to a partnership with WGSS, recalling how Professor Lisa Diedrich, the chair of the department, checked in with her last summer to see how the podcast was going. Shaikh mentioned that it was expanding at a rate that was too fast for three people to handle. It was then that Diedrich suggested starting an internship through WGSS.

“The support from WGSS was just monumental,” Shaikh said. The for-credit internship program enabled the team to hire six student interns from a variety of disciplines across the university (e.g., majors such as biology, computer science and psychology) who assist with website maintenance, social media and branding, as well as join in on the podcast recordings.

“When we started the podcast, I thought it would mostly involve medical-based conversations,” Shaikh recalled. “Having more voices has helped us expand the depth of our conversations in an interdisciplinary way.”

Shaikh said the internship has become a pilot for the team to better serve the community. After recording the podcast’s second season of six episodes, which debuted in December 2021, the team is now taking a break to focus on other outreach initiatives, including creating professional development seminars and an “internship clothing closet” for undergraduate students, as well as addressing some of the structural aspects of the podcast itself.

Shaikh said she’s also interested in launching a scholarship. “Financial support plays such a huge role in the lives of so many students who work part-time jobs — sometimes multiple jobs — which can be difficult to balance with a full course load,” she said. “I’ve been inspired by peers who, because of their identity in the LGBTQ+ community, may not have an external basis of support. So our goal is to provide financial support to any students with disadvantaged backgrounds to help them achieve academic success.” 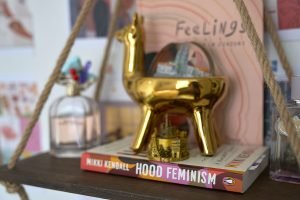 A collectible in Zarya’s apartment.

Throughout her time at Stony Brook, Shaikh said that her STEM courses, combined with what she has learned in WGSS, have taught her the importance of applying a humanistic, empathetic approach to patient care. Particularly within the medical field, there’s potential for miscommunication, she believes, especially if a healthcare provider isn’t able to connect on a personal level. Shaikh can personally relate to this, having grown up in a household with multiple cultural backgrounds.

Over the years, Shaikh has learned several languages, including Punjabi, Russian and Spanish, and she’s currently learning Mandarin. “Being able to communicate in several languages has always been important to me because it’s difficult enough to understand medical terminology — while translators may understand a patient’s native language, they may not grasp the nuances of medical language,” she said. “It’s important for a patient to understand what’s being communicated to them and to have the power in their own medical decision-making to relay that information back.”

While her initial plan is to focus on cardiothoracic medicine and become a surgeon, Shaikh realizes there’s so much more to explore. “Hopefully, I’ll have more clarity once I’m in medical school,” she said. “I’m happy to know I’ll still be among my podcast community after I graduate, yet sad to think that I won’t be a student. What’s nice is that I’ll still be able to give back to Stony Brook thanks to the continuation of the many initiatives I’ve worked on.”

As a member of the College of Arts and Sciences Dean’s Student Advisory Council, Zarya has performed social media takeovers for the College, answering questions from students. Here, Zarya describes an “accidental” situation that led to a job as a medical scribe in New York City and spearheaded her clinical experience, leading to her shadowing at the Stony Brook Heart Institute and an opportunity to give back to the community as a local EMT – an experience she loves! She also shares advice for fellow and potential Seawolves, from connecting with professors, staying organized, and favorite places to eat on campus.

Rachel Rodriguez is the communications manager for the College of Arts and Sciences.

“Queer Diagnosis” is available on Spotify and Apple Podcasts and can be found at QueerDiagnosis.com, Twitter and Instagram @QueerDiagnosis. If you’re interested in being interviewed for Season Three, email QueerDiagnosis@gmail.com.