Lauren Richmond studies how cognitive function changes as we age 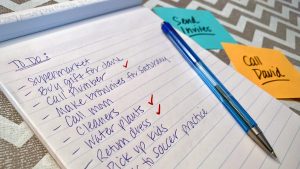 There’s a common misconception that memory inevitably falters with age, and while it’s true that on average our memories get worse as we get older, it’s not true that all people fail similarly, said Lauren Richmond, an assistant professor of cognitive science in the Department of Psychology. “Younger people tend to explain away memory errors as being caused by distraction, whereas older adults are very concerned about what it might mean about their cognitive health.”

Yet, across the lifespan, most people would like to improve their ability to remember, whether you’re a 20-something who forgets where you put your phone or a Baby Boomer with name recall issues. That’s why Richmond, an expert on memory function who was named a 2019 Rising Star by the Association for Psychological Science, is focused on the challenges that aging can place on our cognitive abilities and ways to overcome them.

Prior to joining SBU, Richmond held a postdoctoral fellowship in the Psychological and Brain Sciences Department at Washington University in St. Louis and received her PhD from Temple University. She has published 20 articles in peer-reviewed journals and has received grants from the National Institutes of Health. She said it was her work as a research assistant in a neurology lab studying patients with dementia that led to her concentration in the disconnect between memory when people are in their own environment, where they tended to have more confidence in their abilities, versus being tested in a lab setting.

“I became really interested in this idea that in our everyday environments we might have social supports, semantic memory and other things that we can use to help perform tasks in a way that doesn’t look disrupted, but when that same person is put under testing conditions with lots of controls in place, they may look more impaired,” Richmond explained.

Her current research in SBU’s Cognitive Aging and Memory Lab is focused on cognitive aging, executive functioning, everyday cognition and intervention with a particular emphasis on identifying and developing ways to improve daily life for adults 60 and older. The methods used in her research include behavioral and neuropsychological testing, magnetic resonance imaging, non-invasive brain stimulation and eye tracking.

Cognitive Cues
Richmond’s work is based on the idea that we can complete memory-based tasks, like baking Mom’s famous cookie recipe, in at least two ways: by using internal memory to recall how to combine the correct ingredients or by looking at a recipe card that lists all the ingredients and amounts. Her work specifically focuses on the latter scenario — the use of external aids, like the recipe card, to reduce internal cognitive demands. She added that this strategy is used by adults of every age. “I’d be lost without my Google calendar to remind me about things I had planned to do. But the idea that we already do a lot of these things and understanding how people use those strategies to support performance is something I think that’s really interesting.”

This cognitive offloading — using an external approach to help you remember rather than relying on your internal memory — isn’t something that’s been well-characterized in lab-based experiments, Richmond said.

“Often, in the lab we test people’s internal memory, rather than thinking about what other strategies people might be able to bring to bear to complete the memory task successfully. If you don’t want to rely on internal memory, we think that engaging in offloading could be a really helpful tool for supporting successful performance of memory-based activities.”

Richmond emphasized that cognitive offloading itself doesn’t improve internal memory; instead, it improves your ability to carry out tasks that could rely on memory but could also rely on external reminders.

A Little Help From Friends
A second line of research for Richmond is in close partnership with Suparna Rajaram, a SUNY distinguished professor and director of the Social Memory and Cognition Lab in the Department of Psychology. One of Rajaram’s areas of research is collaborative remembering, the idea that social settings can be used to help individuals recall information.

Richmond said they’re studying the idea that memory doesn’t always operate in isolation. “When you engage in social reminiscing with one or more people, asking them to remember what you last ordered or about a book you all read, we are interested in the extent to which this exchange can serve to enhance one another’s memory,” she said. “The positive aspects of collaborative remembering include the possibility of being reminded of a detail you had forgotten or having an error in one’s own memory corrected.”

The downside, she said, is that someone could give you the wrong information. Another factor that has been demonstrated in Rajaram’s lab is the concept of retrieval disruption: when you want the other person to help you remember a detail but they change the subject.

“We’ve become really interested in whether there are individual level factors that can predict who can best benefit from that experience of engaging in social remembering,” Richmond said. Their comparison group is made up of student volunteers. “To understand what happens in old age, it helps to understand the normal range of performance that we would expect to see in a sample of healthy younger adults.”

Rajaram added they’re studying under what conditions the disadvantages outweigh the advantages and how to optimize the benefits of collaborative remembering with aging. According to Richmond, they’re hoping to eventually apply this information to individuals who are developing dementia and age-related decline to create cognitive support in social communities.

Improve Individual Memory
Because Richmond’s research is across the lifespan, she said it can apply to students and young adults as well. She tells her students that to study effectively, rather than rereading a passage, they should try to quiz themselves on what they just read.

“Engaging in retrieval practice is really important for memory. It’s the same as when you meet somebody new, trying to retrieve their name rather than just relying on them to tell you their name again. We know that doing that self-testing is really important for memory,” she said. “My students are always dismayed when I tell them this because it’s a much harder form of studying than just rereading the notes that they took in class.”

One main adversary of memory retrieval for all ages, Richmond contended, is distraction. She challenges people who say they have trouble remembering to think about the last time they really paid close attention. “We’re often dividing our attention, where we’re thinking about the next item on the to-do list as we’re checking off the item at hand. As much as possible, paying attention to the present moment is really important for giving yourself the best shot at getting high-quality information into the system, and that can help promote retention of information long-term.”

Do you keep forgetting where you parked your car or the name of the new neighbor? Lauren Richmond suggests these strategies for improving memory — no matter what your age.

Practice retrieving information.
This is the testing effect, like using a flashcard to test yourself or repeating the name of someone new you’ve just met. Richmond said this has been shown to promote long-term retention of information.

Practice the spacing effect.
Test yourself to remember that person’s name a couple of hours later, that evening and twice the next day. “If you give yourself some space in between the testing occasions, you’re going to be able to better retain that information in long-term memory.”

Pay attention when you learn something new.
“When you really want to remember something, giving it your full attention is really helpful in making sure that you’re getting as much information into your system as possible.”

Connect new information to something you already know.
“Trying to connect the name of a new person you meet to a song that you know or a celebrity that you can picture can be helpful in providing a retrieval cue to get back to that information.”